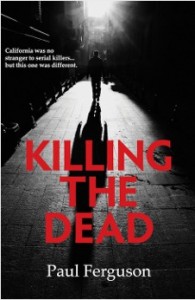 When Canada’s Paul Ferguson quit as Eurosport’s ice hockey commentator and then sold his business a short time later, many people thought he was getting ready for life on the beach. Those who really knew him, however, knew he had other plans.

Since stepping out of the corporate world he has become a full time writer with several short films under his belt including the BAFTA nominated My Darling Wife. And now he’s followed up with the publication of his first novel, a fast moving crime thriller, Killing the Dead.

“It feels strange not going to my office in London or picking up a microphone in either an ice rink or American Football Stadium,” says Ferguson. “It just goes to prove, you are never too old to make a career change.”

In Killling the Dead, investigative journalist Leigh Turner is trying to solve the death of her brother alongside that  of both her parents in a car accident. Are they connected? And can she persuade veteran police detective Dan Scott to abandon his hostility to journalists and listen to her theories?

a failed actor and script writer, is now puppet master in a string of macabre serial killings. He’s also luxuriating in the fact that, reminiscent of the Zodiac killer and others, the whole of California is talking about him as he finally lives the Hollywood dream.

All of which leaves Scott under tremendous pressure from City Hall to break the case as the bodies mount up.